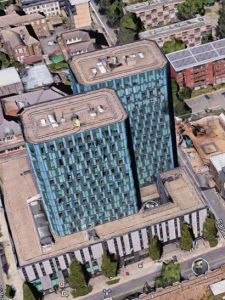 We first visited London in 1990, our first trip abroad. Up until 2014, we had not returned, despite having a wonderful time. We decided to go back and see more of London, and then go on by train to Paris, with a final destination in Normandy, where I planned to leave some of my mother’s ashes on my father’s grave in the American Military Cemetery.

We arrived so early in the morning that we had to leave our luggage with our travel agents, City Apartments. Unfortunately, their offices were at the bottom of a long flight of stairs, and there was no elevator. We took a walk and got some croissants at a Pret à Manger. This is a chain offering croissants and other French-style snacks either for takeout or to eat on the premises. We later saw franchises in Paris. After retrieving our luggage and picking up the keys, we boarded a bus and went to Sky Apartments, on Calshot Street. These are ultra-modern apartments in a multi-story building overlooking a largely residential and commercial area. There were many rooftop solar panels visible from our window, which surprised me a little, given the northern location. Across Calshot street was the Bistro de la Gare. We ate there a couple of times during our stay.

The décor at our table that night featured panels from wine casks. Our waitress was French, but of course she spoke English fluently. Contrary to myth, the food was fine at all the restaurants we visited during our stay.

At various times we visited several parks, and the department stores Harrod’s and Selfridge’s. We had brilliant sunshine almost every day – so much so that I had a problem with sunscreen washing into my eyes.

Sharon had some genealogical research to do at the city archives, which was why we had chosen to stay in the St Pancras area. This was first on our agenda. But we were a bit early and we stopped first at the Postal Museum (15 Phoenix Street), and saw an exhibit on an underground mail delivery rail system that was used for many years in London. At the London Archives, the staff were very helpful, and Sharon had an opportunity to look for ancestors.

We took the Underground (for people) to St. Martin-in-the-Fields.

This church has a 500 year history and is very active in the cultural life of the country through the affiliated Academy of St Martin in the Fields. The image above shows the 2008 East Window, created by Shirazeh Houshiary, While visiting, we bought tickets for dinner and a concert to be held at the church.

We visited the Churchill War Rooms, an underground labyrinth of offices used by the government during World War II. One of the notable relics was a wall-mounted cigarette lighter, testament to the atmosphere in which the cigar-smoker Churchill was working. These rooms were well-depicted in the recent film “Darkest Hour”, featuring Gary Oldman and Kristin Scott Thomas.

We crossed the river and saw the New Globe Theater, and had lunch overlooking the river. Afterward we visited the Tate Modern gallery. This is built in an old power plant, on a gigantic scale. Among the exhibits was this sculpture by Henry Moore:

Moore said in effect that this was related to the idea of maternal protection, like a Madonna and Child composition. When we were done with the exhibits, we visited the museum shop and I came face to face with the British actress, Helena Bonham-Carter!

Our eyes were at the same level. She is 5’2″ tall, so she might well have been wearing heels, which I could not see because she was wearing a full length dark flowered print dress. I could not help reacting to her at this encounter; but we did not interrupt her shopping. She was there with a boy of about ten. How likely is that, to run into a world-famous person while on vacation? One of millions living in London? On the other hand, what a nice confirmation of an interest one might well expect to find in a professional artist.

June 6 we had dinner before the concert at St Martin-in-the-Fields. It was served cafeteria style. The concert was entitled “Baroque Choral Masterpieces by Candlelight.” We heard the Gloria of Vivaldi and Bach’s Magnificat, performed by Canticum, a leading choral group in the country, with Mark Forkgen conducting.

We went on Saturday June 7 to the Royal Opera House to see the Dialogue of the Carmelites, with Simon Rattle conducting and Thomas Allen as the Marquis de La Force. We went early, having reserved dinner. Our table was on a balcony overlooking the House bar and lounge. We ate our dessert during intermission. After the performance, which was very moving, there was a lot to see on the street and we walked a while before descending to the Underground for the short ride to St Pancras.

On Sunday we took an afternoon cruise down the Thames to Greenwich. We walked up to the Naval Observatory (where worldwide time begins every day), and visited the Royal Chapel at the Naval College. We saw the Queen’s House from a distance.

We took the train back to London.

On June 9, we visited St. Giles’ In the Fields. This was of special interest to Sharon as it was the parish of her great grandmother’s family. We had a chance to talk with some of the church employees. A model of the church was on display.

We went to see the Diana memorial, a fountain and wading area in Hyde Park. Our last evening we ate at Bistro de La Gare again.

The contrast between our visit to England in 2014 and our earlier visit in 1990 was considerable. Instead of two nights, we had a week in London this time. In 1990 we spent a night in Cambridge and a week in Durham, then rented a car and drove to Windermere, and then Oxford.

In the morning we walked to St. Pancras station and went through French border control before boarding the TGV for Paris. On arrival there were no further formalities. It was as if we had been in France all along. After a short wait in line, we boarded a taxi and rode to our apartment near the École Militaire. Our easiest entry ever into Paris was made through London! I wonder what will happen to all that after Brexit…