“Our” apartment on the Avenue Duquesne is in a very quiet neighborhood, but close to many attractions, including Les Invalides, the Eiffel Tower and the Rue Cler. It is a very livable area. There is a convenient supermarket right next to the École Militaire Metro station.

There are many cafés, such as the Central, along the Rue Cler. I photographed these two young women (from a considerable distance) because of the flaming red hair. There are a couple of supermarkets and many specialty food suppliers, such as this one right across from the Café Central. People line up for croissants, pastries and fresh bread here.

Not far away is the Musée Rodin, which in addition to the famous sculpture The Thinker, the Burghers of Calais, and the Kiss, has a beautiful garden:

We had reserved seats online to the Opera Garnier.  This ornate building was begun by Napoleon III, but he never got to attend an opera there, as he was deposed and forced into exile during the Franco-Prussian War before the building was finished in 1875. We saw The Coronation of Poppea. Although we had toured the Opera before, we had never attended a performance there. Most Paris operas are shown at the larger and more modern Opera Bastille.

We rented a car to visit our friend Danielle, in the suburbs of Paris, in a little village called St. Aubin. This was our first experience with GPS in France, which did not help us on the way, as we neglected to inform ourselves sufficiently about which particular St. Aubin we were heading for. After asking for directions we were able to get close enough to call Danielle. She came to escort us back to her house. We had a nice visit and lunch with her. She proudly showed us around the village. For our return trip, we knew the exact address, and the GPS guided us directly to the entrance ramp at our parking garage!

Later we rented another car and drove to Normandy. The GPS took us straight to our destination with no problem.

Our original plan was to stay not far from Omaha Beach. Normally we would use Gites de France, but I could not find a suitable place. We wound up reserving an apartment that I found online with a firm called Interhome, based in Germany. The apartment was in Cabourg, not very close to our destination. However, this choice turned out to be fortuitous, because it was here that Marcel Proust stayed, at the Grand Hotel.

Cabourg became Proust’s “Balbec” and this hotel was vividly and accurately described in his multi-volume novel À la Recherché du Temps Perdu. Cabourg was fortuitous for another reason, because I had made an online acquaintance with Armelle Barguillet, a poet, essayist, and an expert on Proust. Once we had reserved our apartment, we made plans to meet in person.

Cabourg is a major tourist attraction, famous for the hotel and casino, but also horse racing. The streets radiate from the park in front of the hotel, and along many there are restaurants and shops. We stopped for crepes at one of these on the Avenue de la Mer.

Our apartment had a nice private patio in back, and we ate outdoors several times.

Isabelle and Thierry, our long-time friends from Louviers, drove us to the American Military Cemetery in Colleville. They stopped along the way to buy some flowers. When we arrived, there was a new welcome center, but we avoided it because there was security screening. I was carrying a packet of my Mother’s ashes to sprinkle on the grave of my father. We went to the grave site and had a little ceremony, playing “Remembrance” by Eleanor Daly, as performed by Albany Pro Musica. Just at the moment I placed the ashes, it struck noon and the loudspeaker system played “Taps.”

We then went up the coast a short distance to a restaurant overlooking the beach and had lunch together, a tradition for all our visits. We saw various monuments in the area. On the way back, Isabelle took a cellphone call. Her own mother was very ill. We spent a few minutes with our friends in our apartment in Cabourg, enough time for us to give some presents to the children. The family had a long ride back to Louviers. We were touched that they volunteered to take us to Colleville, despite their personal troubles.

Another day we drove to a countryside restaurant to meet Armelle and her husband Yves. We had lunch together, and then followed them to their apartment in Trouville, which is near a country house made famous by Proust as “La Raspelière:” Le Manoir des Frémonts. 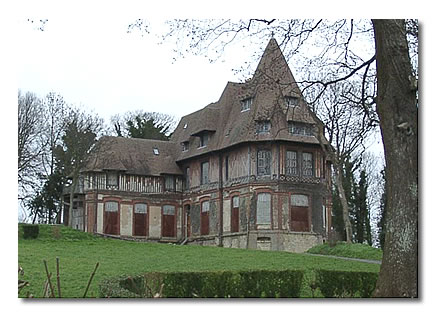 It was here that Proust staged the summer house of Mme Verdurin, the pretentious and wealthy hostess for a small coterie of mostly bourgeois Parisians, more or less snobbish in the French sense of being social climbers. We walked by this large country house before returning for a fruit tart that Armelle had made. It was a splendid afternoon, an interesting encounter, and we were very honored to be invited into their home.

There was a music festival going on in Cabourg. We saw several groups performing to large and happy crowds. 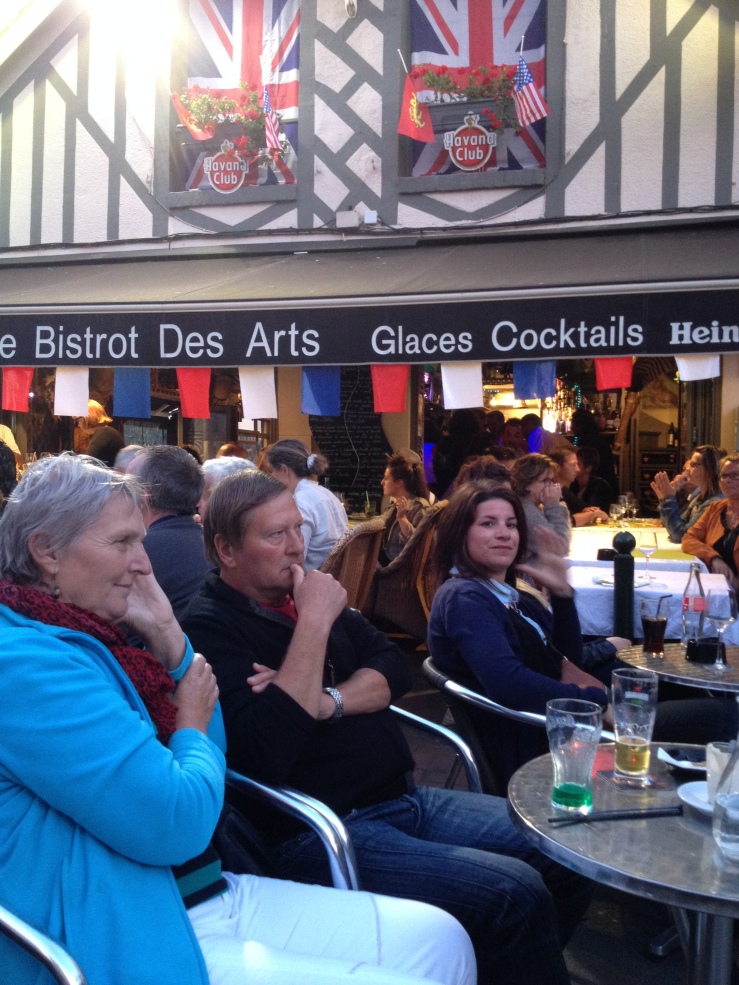 We took a day trip to visit Honfleur and Étretat. At Honfleur, we visited the Musée Boudin, a very substantial collection of diverse works. Here is a  picture which I thought very impressive by Adolphe Marais, entitled Retour du Troupeau (1899). This is a floor-to-ceiling painting on a theme that Marais used many times.

After lunch in Honfleur, we went on to Étretat, which required us to cross the Pont de Normandie:

This picture was taken from an overpass apparently constructed for the very purpose of amusing tourists, and possibly to prevent accidents.

Étretat was crowded with tourists, and we had to park far from the beach. However, it was worth the trouble to see the famous arch. 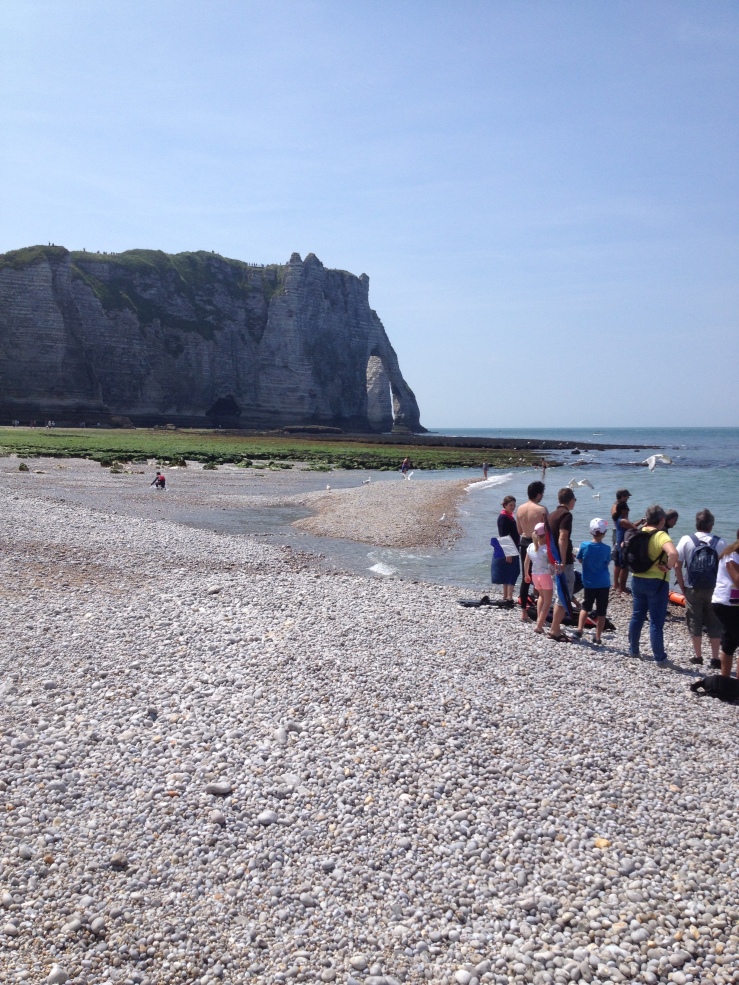 Another day we went to Rouen to have lunch at La Couronne, located near the place where Joan of Arc was burned at the stake.

Directly across from the restaurant is the modern Church of St Joan of Arc, built to replace an earlier one destroyed during the war. It still contains some of the old stained glass windows, which had been saved.

We also drove to Caen, to see the Fortress Museum. We had excellent weather with plenty of insights into the long history of this site, dating from the time of William the Conqueror.

We returned to Paris and stayed our last night in a hotel right next door to our apartment, the Duquesne Tour Eiffel. Somehow, as we rushed to board the cab for the airport, I left my Tilley hat behind. I had bought it during our first visit to Key West. Fortunately, the company has a policy of charging only half price to replace the hat.